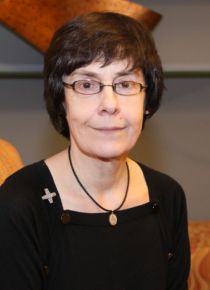 This past November 2017, the Regis Governing Council approved the promotion of Dr. Gill Goulding CJ* to Professor of Systematic Theology.   In its recommendation to the Governing Council the Regis Appointment and Rank Committee noted her many academic publications, excellence in teaching and lecturing, and dedication to formation for ministry.  These many accomplishments have inspired Regis students and their TST colleagues over the past 17 years of Sr. Gill’s ministry in Toronto.

Professor Goulding joined the Regis faculty in 2001 having completed her doctoral studies at the University of Edinburgh.  Over the past 17 years she has taught at the basic and advanced degree levels in the areas of Ecclesiology and Trinity with a special emphasis on the works of Hans Urs von Balthasar. Ignatian spirituality has consistently informed her work and at times been the subject of courses e.g. The Theology of the Spiritual Exercises.  She has team taught with TST colleagues both at Regis and Wycliffe Colleges courses in Balthasar and Lonergan and Barth and Balthasar (under the title Two Swiss Radicals) respectively. Her past research and publications focus in the areas of: spiritual hermeneutics; the theology of Hans Urs von Balthasar; contemporary ministry within the Catholic Church and Ignatian Ecclesiology. She is currently completing a book entitled The Dynamic Impact of Mercy on the Mission of the Church, which looks at the theological underpinning of mercy and the way Pope Francis uses mercy as a hermeneutical lens for his papacy. Professor Goulding has other ongoing research interests which include: The inextricable link between contemplation and theology in the quest for profound truth; The ‘place’ of fragmentation and organic vision in current theological research methodology; The theology of Romano Guardini; and The imperative of love in the theology of Cardinal Joseph Ratzinger and Pope Benedict XVI.

Sr. Gill is especially cognizant today of the need to encourage young women in the academic setting: “I am concerned to encourage young women who have a passion for the study of theology, particularly systematics. As Pope Francis has indicated we need the feminine voice also, in the discussions of theology, for the ongoing life of the Church.”   This is acknowledged by one of her doctoral students: “Sr. Gill exudes a passion for the building up of the Kingdom on earth through the ministry of theology, a passion which draws her students to her, fortifying them to ‘go and do likewise.’ As a woman student of theology and a woman of faith at the outset of my career and life of ministry, I am emboldened and inspired by her example of scholarship, prayerfulness, service, and integrity.”(Christina Labriola, PhD Candidate)

Professor Goulding has contributed internationally as a member of several ecclesial committees and commissions.  In 2012 she was appointed by Pope Benedict XVI as a theological expert at the Synod on the New Evangelization for the Transmission of the Christian Faith. In 2013 she was awarded a Lonergan Fellowship at Boston College, in 2013 also she was given a Theological Research Fellowship, and in 2016 a Henry Luce III Fellowship for her sabbatical project on the importance of mercy in the mission of the church. Most recently, she participated in The World Congress on The Dignity of the Child in the Digital Age in Rome October 2017, which addressed the global problem of the exploitation of young people online. She has recently been elected as a Senior Research Associate to the Von Hugel Institute at the University of Cambridge UK. In addition she has been asked to serve as a Vice President for the Canadian Council of Churches.

“Holiness of Mind and Heart: The Dynamic Imperative of Conversion and Contemplation for the study of Theology.” in Ed. James Keating, Entering Into the Mind of Christ: The True Nature of Theology, (Omaha: University of Creighton, Institute of Priestly Formation, 2014); A Church of Passion and Hope: The Formation of An Ecclesial Dispostion from Ignatius Loyola to Pope Francis.  (London: Bloomsbury, 2015); Reform, Revival or Reversal: The Reformation 500 Years on: A Response to Ephraim Radner in Pro Ecclesia (Winter 2016)

For Professor Goulding theology is “an integrated reality.  It brings together a study of theology co-inherent with spirituality in a living faith that actively engages in action on behalf of others, especially the most vulnerable. ”  Her students agree:  “I have always thought that the studying of theology goes beyond intellectual sophistication, and that it should lead one to a deeper experience with God through prayer. Being in Sister Gill’s courses allowed me to ‘do’ theology in this way and I am very grateful for it.” (Fr. Edmund Lo SJ ThM/STL)

*Congregatio Jesu (CJ) was founded in 1609 by the Venerable Mary Ward.