Windows on Theology – Regis College’s continuous learning series – offers non-credit courses of six to eight sessions on topical issues in scripture, church history, pastoral studies, and theology. Interested members of the public of all ages and life stages are encouraged to register. 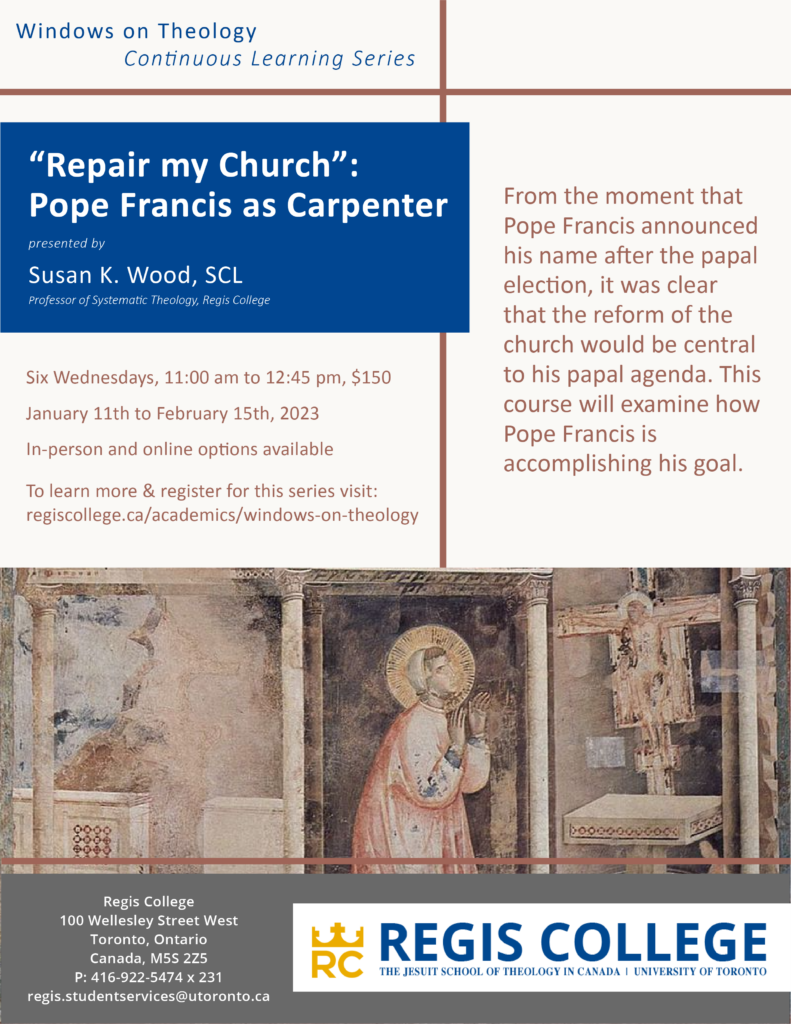 From the moment that Pope Francis announced his name after the papal election, it was clear that the reform of the church would be central to his papal agenda. The Lord had told Francis of Assisi, “Repair my Church,” and Francis would attempt to do just that. The floorplan for Francis for this repair would be a missionary church in which all are called to be “missionary disciples.” This course will examine how Pope Francis is accomplishing his goal.

Six weeks starting Wednesday, January 11th, 2023 from 11:00 am to 12:45 pm. Cost $150.00. The course will be offered in hybrid form, i.e. both in person at Regis College and online. Online participants will receive a Zoom videoconferencing link and will be able to participate in Q&A sessions through the chat function. If government and university health protocols require, all participation would be shifted to online.

Please read the conditions of registration below.
Register online by clicking the button below. A credit card is required.

Regis College is located at 100 Wellesley Street West, Toronto, near the corner of Queen’s Park Crescent East. Regis College is on the 94 Wellesley TTC bus route and a short walk (south) from the Museum subway station. Public parking is available in the University of St. Michael’s College parking lot on St. Joseph Street, one block north of Regis College. The venue is accessible.

If you experience difficulty, please contact regis.development@utoronto.ca or call 416-922-5474 x231. 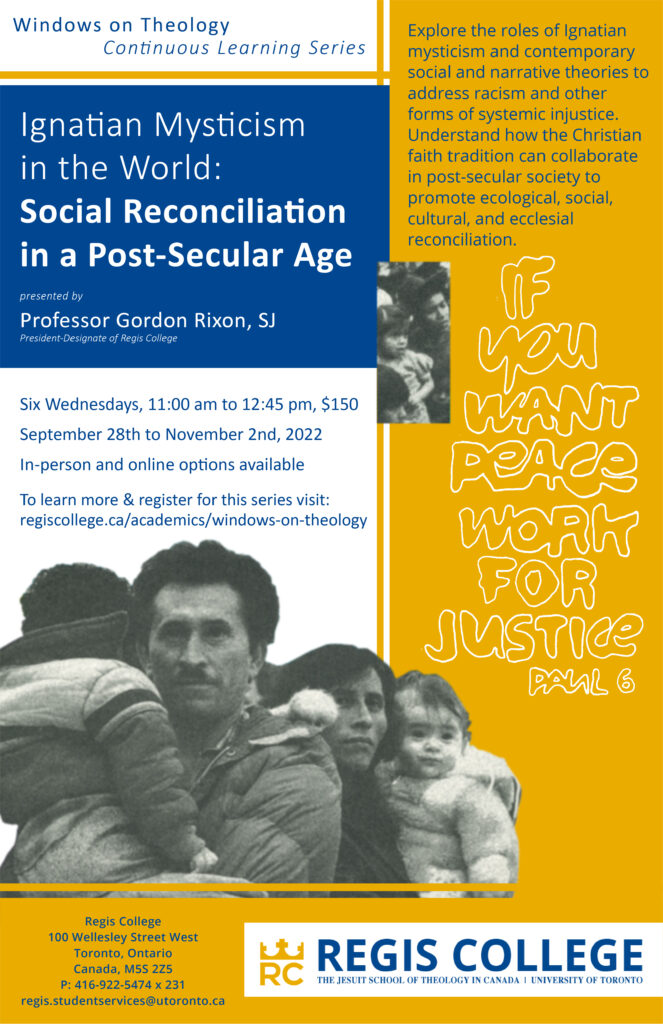 Ignatian Mysticism in the World: Social Reconciliation in a Post-Secular Age, presented by Gordon Rixon, SJ

Six weeks starting Wednesday, October 5th, 2022 from 11:00 am to 12:45 pm. Cost $150.00. The course will be offered in hybrid form, i.e. both in person at Regis College and online. Online participants will receive a Zoom videoconferencing link and will be able to participate in Q&A sessions through the chat function. If government and university health protocols require, all participation would be shifted to online.

Ecological Wisdom: Righting our Relationships with Each Other and the Earth

Humanity currently faces an ecological crisis of unprecedented magnitude. As Pope Francis notes, this crisis is a manifestation of a deeper crisis of modernity that includes “ethical, cultural, and spiritual” dimensions. We are all called to heal relationships between ourselves and the wider Earth community. We need not only transformed technologies, policies, and economics to do so, but also a practical and ethical know-how. Ecological wisdom capable of discerning a path towards just and loving relationships is paramount.

Although the Old Testament is a collection of written works spanning many centuries, there is a common thread uniting all its books. It is a continual account of God’s call, the imperfect response of human beings, and God’s overwhelming compassion and mercy. There is a constant tension between the call to love and serve God and others, and the all too human tendency towards selfishness. Throughout the many instances of human failure, God is faithful. The spiritual journey of the Old Testament imparts wisdom that is both human and divine. We will journey through the Old Testament with the accompaniment of the rabbis and the Church Fathers.

In the Footsteps of Jesus (In Israel and Jordan July 2018)

This journey examines the story of the Christian faith in the place where it all began.  Many scholars consider the land of Israel the fifth Gospel. Immersing yourself in this land will bring you closer to the history, archeology, anthropology, culture, people and politics that spans over thousands of years. Israel is the Holy Land; a country where you will see the Bible come to life in ways that will touch your life today.  Expect a Blessing!

Suffering and the Wisdom of the Body (Fall 2017)

Storied rationality, metaphors and symbols, the knowing of the sensing body, the passions, the senses, movement as rationality, approaches to the paschal mystery… all coming together as practical reason moving us out of suffering into flourishing, now and forever. This 6-week course explored an uncommon meaning of rationality, namely, the logic of movement toward the good in terms of one’s sensed bodily vitality.

Euthanasia. Physician-Assisted Death. Withdrawing Treatment. With the rise of medical technology and the recent legalization of medically assisted death in Canada, the “ethics” of dying can seem daunting. This course examined ethical issues in end-of-life care and draw on relevant Catholic Church Teaching
for guidance.

Tradition in Progress: Doing Theology With the Fathers of the Church (Fall 2016)

This course invited students into the way of doing theology practiced by the Fathers of the Church, so that our contexts and situations may be lit by the same fire which animated their own. The Fathers, almost without exception, were pastors. Their theology, therefore, is fundamentally one of encounter and relationship. Looking to the Fathers helps us to discover what it means for us to be bearers of the Tradition today, so that we can more adequately and humbly appropriate the task of mercy to which we have all been called.

St. Paul spent much of his life travelling over land and sea, spreading the Good News. The ‘In the Footsteps of Paul’ study tour will follow Paul’s steps beginning at the crossroads of three continents on the Mediterranean Island of Cyprus, then travelling on to the mythical Islands of Malta and continuing on to “Roma Aeterna” the eternal city of Rome and beyond.

In Cyprus we will step back in time with visits to prehistoric settlements, Roman mosaics and villas, Tombs of the Kings, Churches, UNESCO sites and glorious beaches. We will travel along the coast to Paphos as Saul did before he became Paul.

In Malta, we will stroll on meandering narrow streets, visit medieval towers, and the oldest known human structures in the world. We will visit St. Paul’s Island where in 60 C.E. Paul was shipwrecked on his way to Rome. The welcome he received is described in Acts 28: ‘After we had reached safety, we then learned that the island was called Malta. The natives showed us unusual kindness. Since it had begun to rain and was cold, they kindled a fire and welcomed all of us round it.’

Italy will be the final country on the tour as we follow Paul to Rome where he died after years of imprisonment. Highlights are ancient ruins that evoke the power of the former Roman Empire including Vatican City, Michelangelo’s Sistine Chapel frescoes, and much more in Rome.