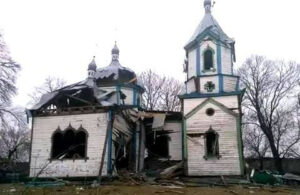 Suggestively linking a Russian Orthodox primate, an ideology, and genocide may seem provocative or sensationalist. For me, given the current unjustified Russian war on Ukraine, the connections between them are far from that. In this moment in our common history as a human family, ‘naming” a reality is utterly important here for assessing the horrific events in Ukraine and the ideology that is complicit in such violence against the very innocence that characterizes the people of Ukraine. Naming is a profoundly ethical choice.

Genocide is not an abstract concept in this present moment for the people of Ukraine, its diaspora, and all people of good will. Genocide is the eradication of racial, national, ethnic, or religious groups. Although there are scholarly debates on this concept, I’ve chosen to approach it within an ethical conceptualization and from a victim-centered viewpoint. Genocide is a term first coined by Raphaël Lemkin during WWII, which he defined as the elimination of differences among “colonized groups” in order to impose the cultural and political identity of a “colonizing group.” Those who hold different identities from the dominant power group are either suppressed, exiled, or killed. Genocide destroys existing bonds of social or civic solidarity of groups and the potential for their self-determination. Further, Lemkin identifies genocide within a much broader framework, since he does not restrict genocide to any one act, like killing or forced famine, since genocide is constituted by various cumulative acts toward the destruction of an identifiable group of people.