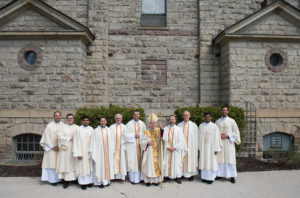 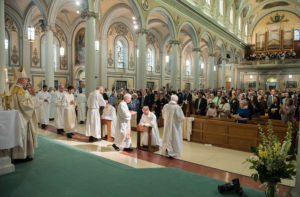 Friends and relatives came from all over to celebrate this great moment with the universal Church and specially with the Jesuit Province of Canada. The ordination of these Jesuits is a tangible sign of hope and joy for a Church hit by sexual abuse scandals. The Archbishop of Ottawa, His Excellency Terrence Prendergast, SJ, especially addressing the two new priests, urged them to imitate Christ, the model Pastor who protects and serves his sheep. Archbishop Prendergast also reminded them that “the priestly ordination of the two members of the Province of Canada is a call to service in humility and gentleness.” For him, the new priests are well aware of the challenges ahead of them in choosing the Holy Scriptures they selected for the liturgy. 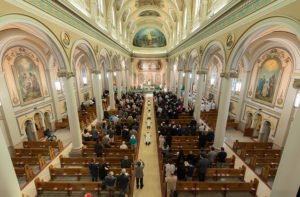 Prendergast said that the four universal apostolic preferences of the Society of Jesus for the next ten years—published by Fr. General Arturo Sosa in February 2019 and addressed to all Jesuits and colleagues—are in perfect harmony with the Gospel of St Matthew. Through the four UAP, the Society of Jesus renews its commitment to work with and for the poorest in our society. In doing so, Jesuits embark on the service of faith and the promotion of justice, a justice that should reconcile us with ourselves and with creation. 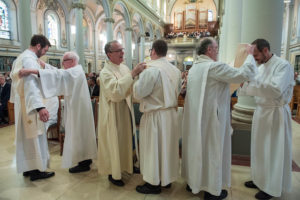 This thirst for justice is more necessary than ever in our Canadian context, where Jesuits are invited to participate in the process of reconciliation with indigenous peoples who are victims of marginalization, exclusion and abuse. As Decree 3 of the 35 General Congregation states, “this reconciliation calls us to build a new world where relationships are just, a new jubilee overcoming all divisions so that God can restore his justice for all.” The two new priests say that they are ready to serve and proclaim the good news of Jesus Christ in a world weakened by social, economic, political and environmental problems. 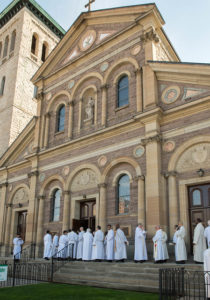 Concerning the ordination of the five new deacons, Archbishop Prendergast invited them to “dispose themselves completely for the service of God and Humanity and to express through actions the word of God they proclaim, so that Christian people, animated by the Spirit, may be a pure offering accepted by God”. The newly ordained men are called to be models by their actions and behaviours, men of good reputation, full of wisdom and the Holy Spirit, like those whom the Apostles had once chosen for the ministry of love. 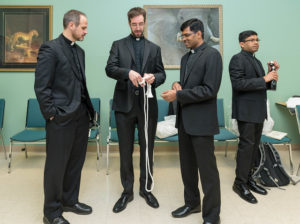 When asked a few hours before his ordination, Julio Miguel Minsal-Ruiz talked about his deepest desires to serve God’s people. With an evangelizing simplicity, he said: “The time has come to witness once again the work of the Lord. These ten years of Jesuit formation have allowed me to verify that I have found the pearl of great value and that it is worth, not only these long years, but all my life. With simplicity of faith, I look forward to participating in the work of the Lord as an ordained deacon, proclaiming with joy and without fear that love alone is trustworthy”. Like Minsal-Ruiz, the other deacons are aware of God’s call to participate in the mission of the Society of Jesus through their responsibilities in their provinces and elsewhere. 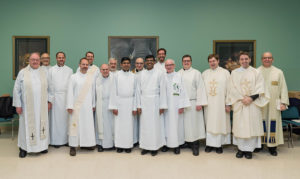 The two priests and the five deacons want to continue working in the Lord’s vineyard, although the path sometimes seems difficult. They desire to deepen their friendship with Jesus and to accompany him as he carries his cross today.

Let us pray to God the Father that he will help the newly ordained to be true companions of his Son Jesus, and to the Virgin Mary our mother that she will place them with her Son, and to the Holy Spirit our light that he will guide them in their missions.

News article written by Jean Francky Guerrier, SJ, and was originally published by the Jesuits of Canada.