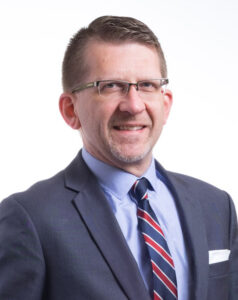 Dr. Jaroslav Skira, a seasoned academic with extensive administrative experience, has been appointed inaugural Dean of the new Regis-St. Michael’s Faculty of Theology.

Dr. Skira, whose research interests and expertise include modern Eastern Christian theology, Catholic and Eastern Orthodox ecumenical relations and the Second Vatican Council, has been appointed for a five year term. He assumes his duties on July 1, 2022, when the federation is formally launched.

Currently a member of the Regis College Faculty, he has also taught at St. Michael’s, including in the undergraduate Christianity and Culture program, the Metropolitan Andrey Sheptytsky Institute of Eastern Christian Studies (MASI), and the L’viv Theological Academy, precursor to today’s Ukrainian Catholic University, Ukraine.

From 2011 to 2018 he also served as the Founding Director of the Graduate Centre for Theological Studies at the Toronto School of Theology, the ecumenical federation of Christian theological schools to which both St. Michael’s Faculty of Theology and Regis College belong.

“I am really delighted to be part of this new chapter in the life of both Regis and St. Michael’s, of further advancing the close collaboration that has been going on for years between these two leading Catholic academic institutions,” says Dr. Skira. “I have great confidence that the new federation will more fruitfully contribute to the theological academy, and that it will enhance student experience and excellence in the various vocations and ministries that our students pursue in the church and in the world.”

Dr. Skira, who served as interim director of MASI in 2018, will both teach at and supervise some of the institute’s Advanced Degree students.

His appointment comes following a “strong recommendation from the search committee,” says St. Michael’s President David Sylvester. “The committee was particularly struck by Dr. Skira’s
administrative experience and felt he will offer strong leadership as Regis-St. Michael’s is launched. I am delighted to be working with him as we begin this exciting new era.”

“The search committee that sought the right person to serve as the inaugural dean of the Regis-St. Michael’s federation merits gratitude for its astute choice,” says Dr. Worcester. “These are exciting times for Regis and St. Michael’s. With Professor Skira as its dean, our federation can now move ahead in achieving its goals.”

A Memorandum of Agreement was signed in October, 2021 which provides for the federation of Regis College and the University of St. Michael’s College for the purpose of “forging a world-class centre of excellence in Catholic theological study, whose mission is to promote teaching, research and formation to serve the needs of the Church and society, in Canada and globally.”