30 May Regis College Symposium: The Dignity of Young People in a Digital Age

Regis College was privileged to host an academic symposium on “The Dignity of Young People in a Digital Age” in the Spring Term in association with the Department of Social Work at the University of Toronto. Regis College was joined by two esteemed lecturers: Professor Hans Zollner, SJ from the Gregorian University in Rome and Professor Elizabeth Letourneau from John Hopkins University in USA. Their presentations discussed a variety of matters speaking to the issues and dangers that threaten minors in this digital age, particular issues involving online child exploitation and the trauma and effects that these victims are subjected to. 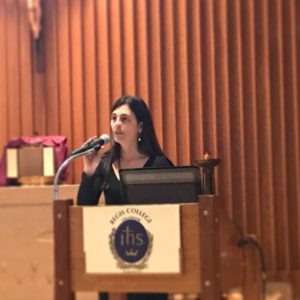 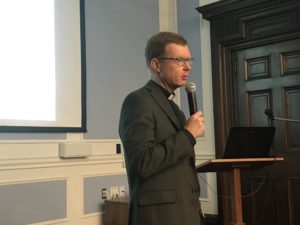 Ninety people gathered to attend the keynote presentation on the first day of our symposium, when Fr. Hans Zollner SJ delivered his lecture “Combatting Child Sexual Exploitation Material on the Internet. Facts and Perspective.” Fr. Zollner SJ shared his wealth of knowledge on the matter of child exploitation across digital media platforms, including the dark web; he gave a factual and statistical analysis to the weight of this issue surrounding our digital society, and the effects this digital and virtual world has on young and vulnerable individuals. Participants gathered from a variety of academic and professional backgrounds, including students, priests and religious, psychologists, theologians, and social workers.

On the second day of the Symposium, Professor Elizabeth Letourneau brought a psychological, sociological, and practical perspective to the conversation, speaking to the victims of child sexual abuse. While analyzing the issue in a concise and statistical way, Letourneau was hopeful when presenting the various initiatives that are currently in motion within the social sciences to practically and proactively deal with the victims of sexual violence and exploitation.

On Friday afternoon three workshops were offered by: Professor Faye Mishna, Dean of Social Work at the University of Toronto; Professor Joseph Schner SJ of Regis College and an officer from Toronto Police Service.  The day drew attendees both from Regis College, TST and the wider university and others who had travelled from further afield including members from St Paul’s University Ottawa. This symposium followed from Sr. Gill Goulding, CJ participation in the World Congress on the Dignity of the Child in a Digital Age in Rome in 2017 and the inclusion of a mandatory workshop on this subject for all Masters students in the Regis curriculum. The following photograph shows Sr. Gill Goulding, CJ, with Hans Zollner, SJ and Professor Elizabeth Letourneau. 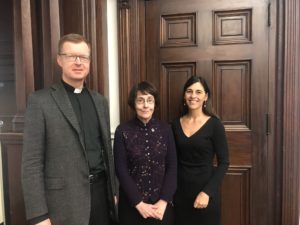