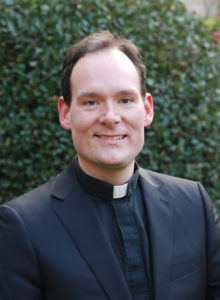 Fr. Michael Knox, SJ is a Roman Catholic priest in the Society of Jesus (Jesuits) and lecturer at Regis College.  After entering the Jesuit order in 1997, he completed an honours BA degree in history at St. Michael’s College, University of Toronto, followed by a diploma in philosophical studies. In 2006, he completed a MA thesis in history at Memorial University, Newfoundland, and Campion Hall, Oxford. Subsequently, in 2009, he completed a Baccalaureate in Sacred Theology and a Master of Divinity at Regis College, University of Toronto, followed by a Licentiate in Sacred Theology and an MA in Theology at the same school. In 2015, he completed a DPhil in history at Oxford University, entitled, “The Rhetoric of Martyrdom in the Jesuit Relations of New France, 1632-1650”.

In 2016, he was appointed Director of the Martyrs’ Shrine in Midland, Ontario.