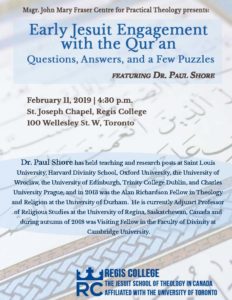 On February 11 at 4:30 p.m., the Msgr. John Mary Fraser Centre for Practical Theology will host a public lecture in the Regis College St. Joseph Chapel. Guest-speaker Dr. Paul Shore will deliver a lecture “Early Jesuit Engagement with the Qur’an: Questions, Answers, and a Few Puzzles.”

Among the representatives of seventeenth-century Catholicism to engage with the Qur’an were four Jesuits: Stephanus Arator (1541-1612), Peter Pázmány (1570-1637), Ignazio Lomellini (c. 1565-1645), and Michael Nau (1633-1683).  Arator and Pázmány relied on translations and transliterations of the text of the Qur’an to construct their arguments, which were driven as much by deep divisions within the Christian world as they were by knowledge of Islam, and which were shaped by anxiety over the spread of Unitarianism in Eastern Europe.   Lomellini completed the first Latin translation of the Qur’an to include the entire Arabic text, although he never traveled to an Arabic-speaking region. The commentaries he wrote suggest that his intended audience was Christian, but his manuscript languished for centuries, ignored by scholars. Nau spent many years in the Levant, working in Aleppo and Damascus, and wrote in Arabic, as well as rendering translations into Latin of passage of the Qur’an.  As a representative of the “Golden Age” of Jesuit travel literature, Nau introduced European audiences to some of the mores of Levantine Muslim cultures. Taken together, the lives of men illustrate the diversity and complexity of Jesuit engagement with the Qur’an during the first century of the Society of Jesus.

Paul Shore has held teaching and research posts at Saint Louis University, Harvard Divinity School, Oxford University, the University of Wrocław, the University of Edinburgh, Trinity College Dublin, and Charles University Prague, and in 2013 was the Alan Richardson Fellow in Theology and Religion at the University of Durham.  He is currently Adjunct Professor of Religious Studies at the University of Regina, Saskatchewan, Canada and during autumn of 2018 was Visiting Fellow in the Faculty of Divinity at Cambridge University.  Shore’s publications include The Eagle and the Cross: Jesuits in Late Baroque Prague and Narratives of Adversity: Jesuits on the Eastern Peripheries of the Habsburg Realms (1640-1773), and a volume of poetry, Encounters, Estrangements, Connections.  Environment Matters, written with Lynn Whidden, is forthcoming from Peter Lang.  Shore lives in Brandon, Manitoba, Canada where he is a deacon at St Matthew’s Anglican Cathedral.