2019 Royackers Lecture: Justice, Freedom and Equality: the Keys to Peace in the Holy Land 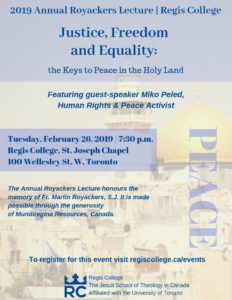 On February 26, 2019 at 7:30 p.m., please join us at Regis College in the St. Joseph Chapel for our Annual Royackers Lecture “Justice, Freedom and Equality: the Keys to Peace in the Holy Land,” featuring guest-speaker Miko Peled, a Human Rights and Peace Activist. Miko will address the three universal values of ‘justice, freedom and equality’ and will explore how these values can change the face of the Holy Land.

Miko Peled is a writer and human rights activist, born and raised in Jerusalem. Driven by a personal family tragedy, he wrote a book about his journey “The General’s Son, Journey of an Israeli in Palestine.” The book covers the work in which Peled’s family has been involved since his grandparents immigrated to Palestine in the early 20th century, as part of the Zionist project. His maternal grandfather was a signer on the Israeli Declaration of Independence. His father was a General in the Israeli army and in the 1970’s, his father pioneered the Israeli Palestinian dialogue. He devotes hi life to working for peace and divides his time between writing and travelling internationally.

The Annual Royackers Lecture honours the memory of Fr. Martin Royackers, S.J. It is made possible through the generosity of Mundiregina Resources, Canada. Register Here