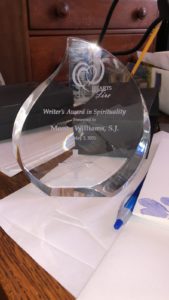 Fr. Williams, S.J. is known to all as simply, “Monty”. His background and interest in spirituality and culture come across in the classes that he presents at Regis College.

His work in spirituality and direction started in his formation as a Jesuit in the early seventies. In the summers he can usually be found giving retreats and workshops throughout Europe, Australia, Asia and North America. His work includes teaching workshops, retreat and spiritual direction, and facilitation in discernment.

The author of several books he is most noted at LIS for co-authoring the two volume film series guide Finding God In the Dark: Taking the Spiritual Exercises of St. Ignatius to the Movies.

The Board of Directors of the Loyola Institute for Spirituality (LIS) created the Hearts on Fire Award in 2003 to annually recognize outstanding Christians whose contributions to spirituality, community service, and Christian leadership have been inspired by their formation in the Spiritual Exercises of St. Ignatius Loyola. The Spiritual Exercises form the basis of the Institute’s vision, mission, and broad array of multicultural and ecumenical services and programs. The award is bestowed by the Loyola Institute at its annual fundraising dinner celebration held in the Spring.